Comparing the toxic effects of the neonics to DDT

Here is an introductory paragraph to a paper by the Federal Bureau of Entomology, released in December of 1948, as DDT, the latest wonder chemical, came into wider and wider use, “safer than arsenic” they assured us.

“The rapidly increasing use of DDT against insects attacking crops visited by honey bees in their quest for pollen and nectar has caused much concern. Some serious losses of bees following extensive field applications of DDT have been reported, but for the most part this material seems to cause less injury than arsenic. However, the general effectiveness of DDT for destroying many species of insects raises the question whether DDT is also toxic to honey bees.”

The chart below has recently been updated by Dr. Bonmatin of France. Based on new data on LD50s, deltamethrin and clothianidin have moved to the head of the parade at 10,800 times the toxicity of DDT. The neonicotinoids are being applied to hundreds of millions of acres every year. 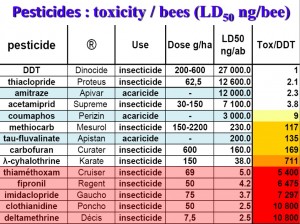 Now go back and reread the opening paragraph. In place of DDT insert neonicotinoids, and in place of arsenic put one of the bad old chemcals they are trying to frighten us with today – organophosphates, carabamates…

The argument hasn’t changed in 66 years, but the difference today is that the environment is being poisoned at almost incomprehensible levels with some of the most toxic chemicals ever created.

We have since learned that the amount citied above, 3.4 million pounds, does not include seed treatments, which account for 90% of actual use.  This bumps the environmental poisoning up to 400 to 600 billion pounds of toxic equivalent every year.  – TT

This entry was posted in Tom's Corner, Uncategorized. Bookmark the permalink.