Here is a link to a very discouraging article, Bee Kill Investigation Continues, but it is also a very cautionary tale. The bumblebee kill in Oregon, estimated at 50,000, most likely eliminated nearly every bumblebee colony within flight range and it could take years to re-establish that population. 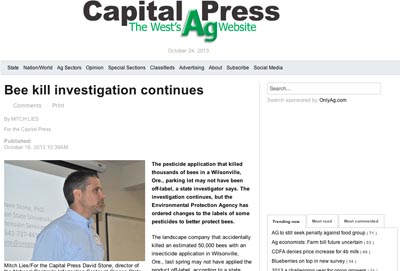 There has been a lot of talk about label changes, and this article does as well, but these label changes are smoke and mirrors, sleight of hand, intended to give the illusion of concern and action when in fact they do virtually nothing beyond what has been in effect for years, commonly referred to as the “bee caution.” “Do not apply this product or allow it to drift to blooming crops or weeds if bees are visiting the area to be treated. . . .”

Worse, the EPA clearly runs away from the challenge before it, focusing solely on foliar applications to bloom. It does little to increase the safety or avoid bee kills by suggesting that applicatioins be made after sunset or when it is too cold for bees to be flying when the insecticide may have a residual effect of days, weeks or months. There were bee kills on Linden trees in other Oregon towns where the spraying had been done months before. The purpose of the label changes, purportedly, was to address the new family of systemic pesticides, the neonicotinoids. and yet their mode of action – long term toxicity – is completely avoided in the label changes.

After a good start, in which several of the neonics were temporarily banned, Oregon authorities appear to be bending to chemical industry pressure. 35 years ago aerial applicators in Boulder County would claim that they were following label directions on corn, for example, because they checked the corn at 4:30 in the morning and saw no bees, knowing full well that by 10:00 A.M. the field they had just sprayed would be full of foraging bees. Oregon Department of Agriculture inspector Mike Odenthal appears to be caving in to the same ridiculous reasoning.