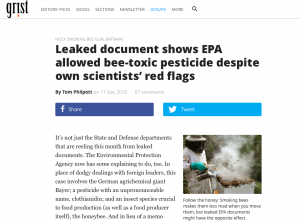 Early this morning while searching for something else I stumbled on this article, Leaked document shows EPA allowed bee-toxic pesticide despite own scientists’ red flags, by Tom Philpott for Grist Magazine. Naturally I couldn’t resist rereading it and I’m glad I did, because it is an excellent overview of what was happening at the time. The leaked memo was really just another public document that the the EPA would have chosen to hide, just as they had tried to hide the Cutler-Dupree Study that is the subject of the article and the leaked memo.

This so-called leaked memo was the seminal event which set off the growing scrutiny we see today. Philpott’s article is an important and informative reference point now, showing us how far we have come, but also how far we have not come.

The EPA has circled the wagons and raised the castle walls. EPA scientists have been effectively muzzled and can no longer speak with anyone unless through the EPA’s Orwellian Communication Department. The EPA has unleashed a barrage of phony gestures to make it look like they are doing something when they are not, and in many cases making things worse.

Clothianidin was granted full registration despite the failure of the core life cycle study, which has now been replicated for a cool million dollars but has yet to be peer reviewed or published, while author Cynthia Scott-Dupree tries to weasel the results into the public discourse nevertheless. For its part, rather than revisit and reassess its flawed decision on clothianidin and the failure of the core study the EPA has chosen instead to use its resources and taxpayer’s money to defend its failures in court.

So how far have we come? In some respects we have made great strides, but in many ways we are further behind now than ever. We’ve gotten no relief, only empty gestures, and things have gotten much worse. Five years later the EPA has effectively dug in it’s heals and has stonewalled the science. Congress is asleep at the wheel and the poisoning gets more massive every year.