This 24 minute interview with Minnesota beekeeper Steve Ellis on The Neonicotinoid View expands upon the problems seen in the video of his recent and ongoing bee losses.

June Stoyer: Steve, please begin by telling our audience about yourself and your experience as a commercial beekeeper.

Steve Ellis: I have been a commercial beekeeper for the last 32 years. I operate a commercial bee operation that’s migratory between Minnesota and California I call Old Mill Honey Company.

Tom Theobald: What do you think the economic impact is going to be for an operation of your size?

Steve Ellis: I do describe this as an extreme depopulation event. BayerCropLife was out, did a thorough report and investigation of my incident last year. Their conclusion was that (in their report) which they provided me and is public, that the bees had an exposure. The lab results coming back with a chemical detection was indicative and confirmatory of an exposure event to this chemical. Then, they didn’t go as far as to say what effects that exposure event might have on bees.

June Stoyer: What sources of water are available for your hives in this particular location?

Steve Ellis: Water is a question and also another potential contaminant route for Clothianidin. The state came out and took some samples of surface water. What bees are using for water is surface water. Surface water and low kind of kind of sloughy areas where there is roots and moss and things where they can land upon. Bees don’t like to gather water from a big deep water sources because they are really good fliers but they are just terrible swimmers. If they get into water and deep water, they drown pretty easily. They want to go to a wet, spongy kind of source that they can land, stay dry, suck the water up and fly away. So, here I have those kinds of sources that are low, spongy areas. That is where they go. There are a number of identified spots I showed the investigators to take water samples. That is a particular mechanism that this chemical could be getting into the water that they are feeding on and bringing back to the hive as well.

June Stoyer: Tom, could you please recap for our audience exactly what the sub-lethal effects of neonicotinoids are.

Tom Theobald: Just recently we have seen a report that was issued by the EPA and USDA where they essentially put pesticides at the bottom of the list. They said there were many factors associated with the problems we are seeing with the bees but if you look at the science with an open mind, what the science shows us is that these systemic pesticides have a variety of modes of action from very subtle to very dramatic. What we are talking about today is one of the more dramatic, more immediate affects.

Effectively, these systemic pesticides open the synapses. They open the neural connection and the bee is essentially just firing to death -its nervous system has gone crazy. These are neurological toxins. There are many other ways that they can have an effect on a colony of bees that may not show up for weeks. They can interfere with their homing ability, with their memory, with their navigation ability, with their grooming ability. Grooming is very important in a social community like the bees. That’s how the pheromones; the scents are transferred within the colony. The work of Dr. Henk Tennekes in Holland has shown us that the effect on the synapses is cumulative and irreversible. The conclusion from that is that there is no safe dose and in fact, if death is the end point, it takes thousands of times less of this product to produce that same effect if it is administered in tiny amounts over time, which appears to be what’s happening in the environment. 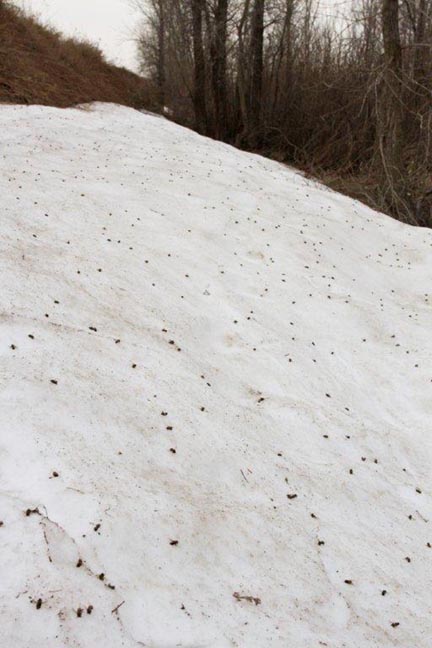 Dead bees on a snowbank near Steve Ellis’s beeyard.

Listen to the full interview on the Neonicotinoid View.