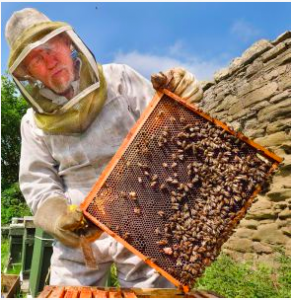 Sadly, I have to be the bearer of sad news. We have all lost a great warrior in the battle against neonicotinoids and on a personal level I have lost a wonderful, inspiring friend. On Tuesday, March 3, 2020,, Graham White of Cold Stream, Scotland lost his 2 year struggle with cancer and passed away peacefully in a Palliative Care Facility in Edinburgh.

As nearly as I can recall, Graham and I probably connected in late 2010 or early 2011 when I had my 20 minutes of fame as the Colorado beekeeper who got the infamous “Leaked Memo” on the EPA’s faulty registration of clothianidin.  We both recognized early on that we were kindred souls and the friendship grew from there.

Graham was a fierce and articulate fighter in the battle against neonicotinoids and the perversion of the EPA and the poison industry. He was an invaluable and irreplaceable resource. We fought these battles together and I gained greatly from Graham’s wisdom and counsel.

In the last few years we spoke nearly every morning by way of Skype and I never failed to come away from those morning conversations inspired and enlightened. Graham had a classical education and a rich full mind. He could speak with knowledge and authority on a wide range of subjects and in a morning I might learn about Shakespeare, rare guitars, wood stoves, opera, the ancient history of Great Britain or an endless number of other topics, along with a large dose of pesticide strategizing. I began to jokingly call Graham “Mister Encyclopedia,” and indeed he was. At this time of year Graham would have been plying the local marshes to collect frog spawn for the small pond in his yard. He had wide and eclectic interests. The frogs will have to do without him now.

Graham’s passing is a loss to all of us. For me it leaves a huge hole in my life. My mornings will never be the same and I will remember on every awakening how my days once began.

Rest in peace, my friend. It was my honor to have known you and be counted as a friend.

Graham’s legacy can, indeed must, transcend his passing. If even a few will take the time to do the homework, understand what Graham was attempting to teach the world and take up the torch to carry those ideals forward, Graham’s work lives on. Click the image of Graham above to read the Acres U.S.A. interview he did. It was one of his longest and it covers much of his life history and nearly all of the elements of the pesticide wars.